A Ride Into The Lore

If you are wondering what your favorite Overwatch character’s height is, it might be useful to take a step back. Overwatch is a multiplayer first-person shooter developed and published by Blizzard Entertainment in 2016. It is not a free-to-play title, as the standard version of the game costs $39.99 and the Legendary Edition $59.99.

Overwatch quickly became an incredibly popular game and now has a very stable and large player base, as well as a growing esports scene of its own. The game is a lot of fun, but not only for its playstyle: the lore is very interesting, and if you’re into Overwatch, then you will certainly find entertaining diving a little bit deeper into the story of the game and its characters.

In this article, we will be covering all the fun heroes you can meet in-game, and specifically Overwatch Character’s Height and some other peculiar traits. But first, why don’t we find out more about the story of Overwatch?

Overwatch’s story is an interesting one about the classic fight between good and evil. We are set in a futuristic world, shocked by a series of events and continuous wars, alternated by periods of peace, which we will now uncover.

Humanity was in a golden age of development and great prosperity. However, the good days didn’t last long, as a threat at some point emerged: the Omnics, evil robots who aimed at gaining full control over the world and subjugating its inhabitants, were putting the entire civilizations at risk. To fight the Omnics, a special organization was created under the name “Overwatch”. These brave heroes finally managed to defeat the robots and restore peace on our planet.

But (because there is always a but) peace didn’t last long. The Overwatch disbanded, internal conflicts arose, and the world quickly turned into a mess with strong corporations fighting to gain more power, terrorist attacks breaking out all over the globe, and signs of a second wave of Omnics attacks about to happen. Because of these reasons, it became pretty clear that the only hope for humanity was one: the Overwatch. The organization regroups, calling its former members to arms and adding new entries to the team, in order to save the world and defeat all evils once and for all.

And this is the point in which you come into place: fight your battle by choosing among 32 heroes, belonging to whatever side you prefer. But who are these characters? You are about to find out more.

Blizzard, Overwatch’s developer, put a lot of emphasis in designing the heroes for their title. They have been praised for their variety and uniqueness, and it is certainly one of the best aspects of the game since it makes it much more entertaining to play. There are, at the time of writing (November 2023), 32 heroes to choose from. These are classified in three main roles.

It’s incredible how different in height Overwatch heroes are. From 1.40m (4ft 7’”) all the way up to 2.23m (7ft 4”), the game presents us a variety of gnomes, as well as giants. How do we gather such information? Where did we take it from?

We have to make some distinctions. In some cases (the majority), the height has been officially provided by Blizzard itself, as the info was disclosed from the game’s release through official videos and comics, conferences and events, reference kits for cosplayers. In regard to some other heroes, no official information was given; despite this, we are still able to confirm these characters’ height thanks to comparisons made in-game with other confirmed models. And, finally, for a few heroes, there is no info at all: unfortunately, it is quite hard to find clear evidence for some of them. Let’s cover in more detail each of these three cases.

Here is a list of those heroes whose heights have been disclosed by the game’s publisher, from taller to shorter.

As we mentioned earlier, some height info has not been provided by Blizzard but instead has been calculated by ourselves. Results might not be 100% accurate, but we are confident they are pretty much spot on. 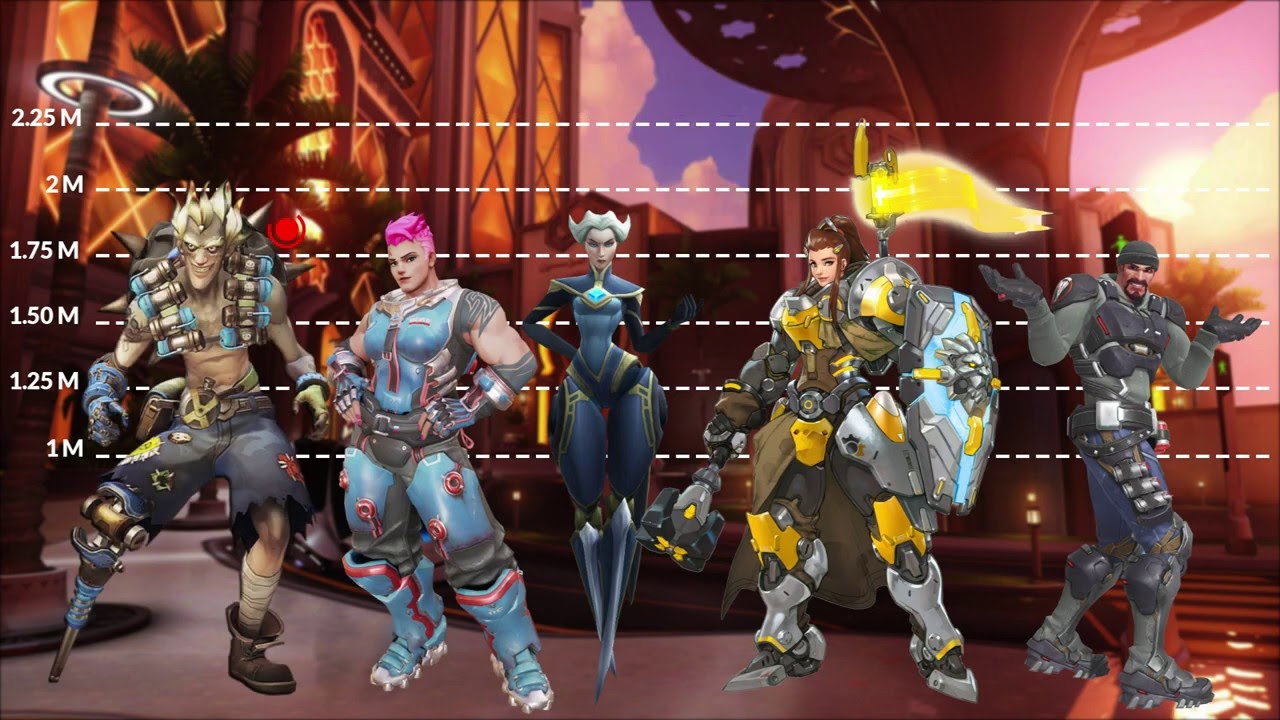 What are we left with? A handful of characters whose height information is unfortunately not available yet. These are: Wrecking Ball, Baptiste, and Sigma. We are sure we will soon be able to tell you their exact height very soon; for now, we have to wait and settle for just playing them in the meantime.

It might be interesting to have a quick look over the ages of our beloved heroes—these range from 14 years old (Wrecking Ball) to 62 (Sigma). We have to give special mentions to Orisa, who is even under 1 year old (she started fighting at 1 month old) since she is a newly-created robot whose mission is to defend the innocents, and Echo, a free, evolutionary robot whose age is unclassifiable.

What can we conclude after all the stream of data we just provided you with? Certainly, results are surprising, given their variety: we have seen how heroes can be incredibly tall or short, as well as very old and very young (fighting at 1 month of age? Crazy, if you ask me). To understand such results, consider the historical scenario Overwatch is set in we talked about at the beginning of our article: a future of high technological development, in a time of war and peace, mad robots and heroes with, truly, supernatural powers.

Keeping such a premise in mind, it’s easy to understand how our friends are generally taller compared to human average right now: humanity is scientifically expected to grow in height in future years thanks to improvements in our lifestyle and nutrition, so tall people in the game shouldn’t surprise us much.

About age, it’s also clear that life expectations will considerably get higher; hence someone who is 60 years old might not be considered an elder anymore. And about Orisa and Echo, they are robots. Nothing else to add.

Don’t forget that scientific experiments may also be a reason for these, at first weird, height and age results: some might be programmed to be taller, or shorter, or have whatever other different characteristics.